Posted at 18:38h in Uncategorized by Citrus 0 Comments
0 Likes
Share

I woke up to the sound of rattling windows and what I thought was thunder. It was still dark and I had no idea what kind of Christmas gift was waiting for me a mile away. I had left San Diego and the US Coast Guard less then a year ago. I was running from the hardest and worst year of my life. I was looking for answers to questions that have none. I didn’t know why or what brought me to this place of self discovery, but there I was. Alongside me was my great friend Jocko who was also on a mission to find himself in a happy place where he could grow as a surfer and human. We both came to Hanalei together and with the help of our good friend Jerry K, we ended up at the condominium complex Hale Moi just one mile from one of the biggest and best waves in Hawaii.

Throwing every leftover we had in the refrigerator into our cheap blender that morning, I mixed my liquid breakfast of champions: rum, Haagen Das vanilla ice cream, one raw egg, milk, and a papaya I picked from the front yard. Jocko was hustling about getting his act together for a Christmas Eve at the beach surfer style! No turkey or any of the fix-ens, just waves! We were lost little Haoles trying to find our way on Christmas away from our families.

Jerry K came over along with his good buddy big bad Bruce almighty (born again Christian). Saddling up, we all got our shit together and started to walk to the bay. The first thing that hit us was the wind. It was blowing straight east at 15 – 20mph. The second thing to slam us in the gut was the size and direction of this new un-forecasted (pre-surfline days) swell.

Our steps quickened with dread (for me anyway). We realized we were in for a giant day with blazing offshore. My stomach was churning. I thought I was going to puke seeing “Hideaways” four times overhead, but it could have been my rum-infused smoothie. Jocko, Jerry, and Bruce were hyped and frothing to ride giant Hanalei; I was less enthused.

For me, it was another day of feeling like my 8.6 was too small to be comfortable in waves that size. Coming out of the Howe bush trail that ended at the back door paddle out, it looked 10 foot plus Hawaiian; for me and you, that means fucking giant! And only a handful of chargers were out. It was the day we all came to ride.

We paddled out back door, got to the farthest regions, called the point, and watched in awe as four times overhead waves peeled down the reef with a perfect west direction. Fueled by a fire breathing 20 mph offshore, the waves looked like they were alive and hungry for surfer flesh. It was overcast, almost raining, a gray day with the best waves I have ever seen to this day. We all charged!

My first shot at a giant one was coming at me at 40 mph. With all that wind ripping up the face I could not look at the wave, or to the right or left, but only straight head, thinking I will catch this beast. Plunging my head to cut the wind, driving foreword with all my weight I started to catch it. OMG, I’m on this thing! Blinded by the hard offshore I couldn’t see anything. As I started to drop, I heard a small voice coming from behind me. “Hey” is all I heard.

Angling my board quickly to the right, the wind gets under my board, my nose starts to lift up off the water, I’m getting airborne on a Hawaiian macker. As time started to stand still I saw where the voice was coming from; it was Jerry already doing a bottom turn on his 9.6 Owl Chapman gun. At this exact moment I realized I was going to land on his head, so instead I took a different approach. I turn hard right, I was maybe one-third down the face. The wind caught my board and ripped out from under my feet and sent it 40 feet in the air, flying towards the outside. With no thought I pushed out as hard as I could and flew backwards and upside down as the lip pitched. I was now a flying stick- man embedded in the lip of a 12-foot Hawaiian freight train.

Looking over my shoulder I can see Jerry pulling in underneath me. He was going for the barrel and hoping I didn’t land on him. I missed Jerry, landing on the beach side of him as he ducked under both me and the lip. I landed hard but retained my breath, then I came to a funny dead spot, no movement just laying there still.

Then the elevator started going up, and up and up and up until I was sure I was done. Here I come Mr. Bottom. As I was going over upside down and backwards, I started laughing to myself about how strange life can be. I came to Hawaii to run away and hide, to soul search, but what did I get? I got what I deserved, a royal Hawaiian beating and a life long lesson, one ingredient to succeed yourself, desire.

A slap in the face from this world; I got what I needed, not what I wanted, but I survived and learned. I got back into the lineup after swimming for an hour to retrieve my board. It was just myself. Jocko, Bruce and Jerry, everyone else had gone home. I was alone on the afternoon of December 24th in 10 – 12 foot Hawaiian juice with flaming offshore, I had survived the worst wipe-out of my life, cheered my friends on, and had a huge heart full of the Christmas spirit.

The moral of my story? Just watch out what you ask for, you just might get it. I wanted answers. I got them. Friends and family are everything. And everything happens for a good reason somewhere down the surfer line, you just have to go far enough out. 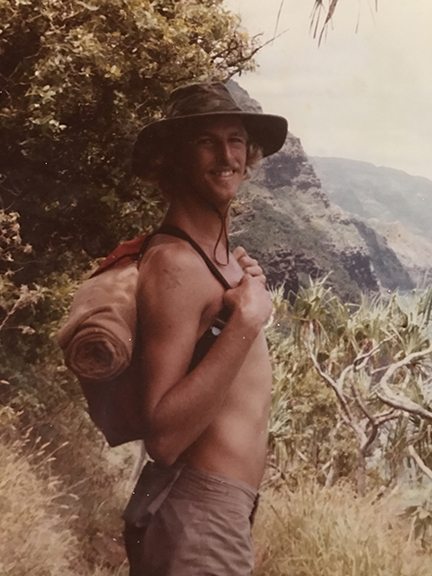